“Oh yeah dad, let’s blindfold the disabled lady? As if she hasn’t got enough problems…..!!”

That’s what I heard from beneath my (rather lovely) fur headband as I left the house last Saturday.
“We’re having a family party” is what I had been told so that sentence sent my mind reeling…..

To put this into some kind of context for you my dear readers, it was the night before my 50th birthday and I had just finished getting ready for this “family meal“. About a month before when I had allowed myself to realise that I was nearly 50 (still hate actually typing those numbers…) I had said that I wanted to treat it in exactly the same way I had celebrated my 40th i.e. ignoring it and just pretending it was a normal day and still claiming to be 39! I could not even compute and absorb the fact that I could even possibly be THAT age (sorry, but I’m not typing it again) so I didn’t want or expect any fuss. Being with a lovely man whose only failing is that he really doesn’t see the point of celebrating birthdays ‘at our age‘, last years had passed in the same customary manner, a small but loving card (if you don’t count the one year when I had a card with a Welsh miners lamp on it….) a small, tasteful bunch of flowers, a kiss and a ‘Happy Birthday’ and that was it. A few years ago, even after a right old girly strop, there was no shifting him so I wasn’t holding out any hopes for a wild celebration this time, which suited me just fine thank you! There did seem to be an unusual amount of notifications going off at all hours on his phone however so I did wonder what was happening. When I dropped (very subtle obviously) hints, the response was that it was a family meal and he needed to liaise with ‘people‘ in order to sort it. Given that all our collective children live away, that sort of made sense so I stopped poking for details and duly shut up. When I was told a few days later that one of them couldn’t make it, that also made sense of the texting so again, I let it all pass me by.

A couple of days before the weekend, another phone call came. P told me that his son was coming to stay for the whole weekend so off we went to do the food shop. We parked on the upper level of the local superstore which has recently been converted an outlet style clothes area. As P did the sensible food shop, I tootled around the rails looking for bargains and was in my element when he suddenly appeared behind me. My lap just ‘happened’ to be full of potential sale items which normally would have raised an eyebrow but instead he helped me look. Then he came upon a very sparkly frock and said “do you like this one?”. I spluttered a curious “ummm, yes…..” and when he replied “then I’ll buy it for you for the weekend“, my curiosity started shouting at me. I kept quiet until that Friday night when I tried the frock on for an appraisal by my daughter. With her seal of approval, I agreed to wear it.

Fast forward to the blindfolding incident…… Having spent an inordinate amount of time getting ready for the ‘family meal’, I was now shedding silver glitter everywhere I went from my new dress, I was made up and contoured to within an inch of my life, I had attempted to curl my notoriously wild hair into some semblance of birthday order and now they wanted me to put a blindfold on! Thankfully they at least allowed me to get into the car first before they plonked it on my head, I have enough difficulty doing that on a normal day, there’s no way I would’ve manage it without being able to see my way. Once helped into the car, I was presented with the offending article, it was placed almost neatly over my overly hairsprayed hair and off we went.

I wasn’t even allowed to take it off when we arrived at our destination. I had two, thankfully related gentlemen, carry me out of the car and into my wheelchair. Now then, I’m not the type to scare easily but am not a huge fan of rollercoasters, fair rides etc so being ‘driven’ around in my electric wheelchair by a stranger whilst blindfolded, has got to be one of the most frightening moments of my life. I held on and clutched tightly to the arms just in case it all went pear shaped and I fell out and tried not to panic when I heard things like “no, not that way” and “hang on, I’ll get it right in a minute“. Then there was a ramp……. and a “hang on love, this might be a bit tricky“, “hang onto her there quick, I need to adjust the speed” and finally “thank god, we’re in“! With those only slightly reassuring phrases in my ears, I was pushed through a door and the blindfold was ripped from my head to the cries of “surprise……”

And there they all were, my family and my wonderful friends, all standing cheering, singing and clapping! All I could think was ‘oh *#*#, I’ve still got my coat on‘ and ‘what the hell have you done to my hair!” With my head in my hands and a few seconds to catch my breath, I allowed myself to look and take it all in, what an amazing sight, smiling family faces, close friends and some friends I literally hadn’t seen for years and years, all there for me! AND there were balloons! Balloons with MY name on them…..!! And then suddenly I really didn’t care about my messy hair, crumpled dress and the fact that so much glitter came off said dress that I was seriously like Tinkerbell spreading outlet store glitter everywhere, it was an incredible night. The prosecco flowed, the slideshow played continuous pictures of me at various times in my life and I actually felt the love. Yes, me, the biggest cynic alive, I FELT loved and whilst I couldn’t spend enough time with all my guests, I can’t thank them all enough for coming.

Am I happy being 49+1? Not especially but bearing in mind that I’m one of the lucky ones who have made it this far and that I’m hoping to have a good many more years in which to pretend to be much younger, I’ll take it thank you very much! 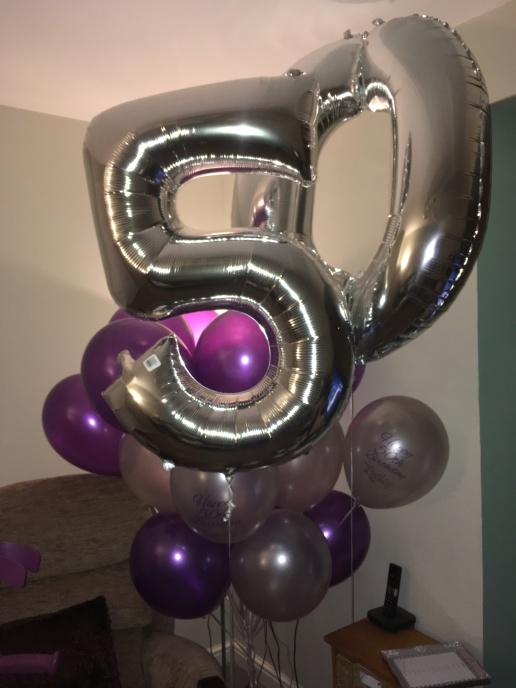 iThere are no comments

Oh dear…..🥺
Am I the only person who spotted Harry’s penis on #sexinthecity2 !!!
‘Mature model’? …me?….
💙 Sale still on but finishes on Tuesday AND an EXTRA 10% off if you buy 4 items!*💙 So now you can grab some even better bargains! 💙
A new month is a great opportunity to take stock of the month ahead.
The reality of living with severe chronic pain has hit me hard tonight. I’m in the middle a huge pain spike that even with a morphine patch and every pill I can swallow, won’t go away.

Begin typing your search above and press return to search. Press Esc to cancel.