What is the ‘right’ body type? aka “Disabled people are hot too……!”

Last month, Facebook blocked a photo of a disabled person. The photo was one of the young woman Vicky Balch who was injured in the Alton Towers rollercoaster crash in 2015 and showed her posing naked and showing the stump of her amputated leg. Facebook blocked it because they said it was “disturbing” and “may cause offence“.

Now, I don’t know about you but this photo, which showed no boobs or any other part of a female anatomy which might raise an eyebrow, wasn’t disturbing at all and seemed to be a young woman reclaiming her femininity by posing in this way. To show everyone that whilst she had been in a terrible incident, she still was the same young woman she’d been before.

Was it disturbing or offensive?

Then just as this Facebook debacle died down a little, I came across a Tweet as I was scrolling through Twitter with another photo having been blocked. This time is was a photo of the blogger @TheLadyFuchsia, a wheelchair using English blogger who has EDS. (Elhers – Danlos Syndrome, a condition that affects connective tissue.) She is a model and actress and posted a photo of herself reclining naked on her wheelchair. Twitter promptly blocked her profile saying that it “may include potentially sensitive content”

She then retweeted the photo to gauge people’s opinions; most people weren’t sure why the profile was blocked until they actually saw the photo and then unanimously agreed that there really wasn’t anything awful there and actually it was a beautiful expression of a female body. 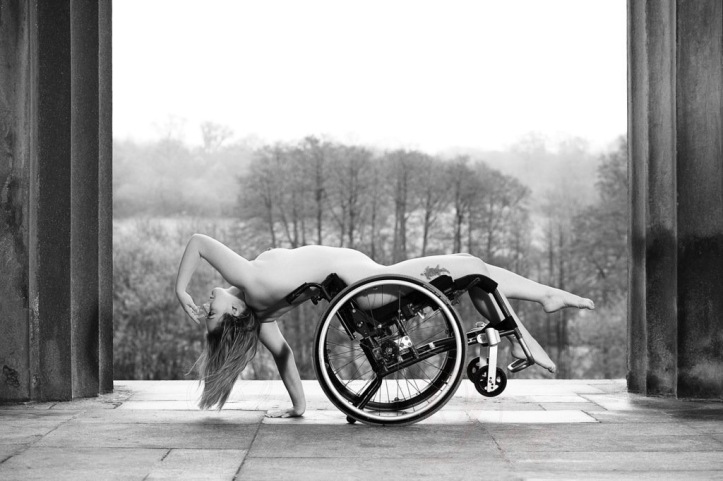 So why, in an age of naked bodies literally everywhere; in magazines, online, on your phones and even in Parliament protesting climate change, is the image of a disabled person’s body deemed as offensive, of a sensitive nature or even disturbing?

As I was pondering these questions yesterday, there was another photo in the media which caused a strong reaction. In a Sunday paper, I saw another body type being judged as ‘unappealing’ but this time the photo was of the so – called socialite Lady Victoria Hervey in a very revealing swimsuit which showed how thin her body was. Now this extremely thin body type was described as “the star’s slim frame” and talked about her “perky cleavage’ and ‘peachy derrière’, but at no time, in the article at least were the photos referred to as ‘disturbing‘.

When I posted this photo online, there were various reactions but almost all of them thought that this photo was “worrying“, “dreadful” and not the body image we should be extolling as the ‘ideal‘.

Three photos, three differing opinions and we’re all no clearer as to who is right or wrong or which body shape, disabled or not, is or could be seen as ‘disturbing‘.

One thing, which really made me think was a comment from a past pupil of mine who, quite correctly, pointed out that the comments that I had made regarding the thinness of the model could be upsetting to people who naturally have a small frame. And one of her comments really hit home though, she said…

That word ‘prejudice‘ really make me sit up and think; there was I banging the drum about not judging disabled people due to their appearance, naked or otherwise and the next second, I was unconsciously making a judgement on the body shape of a ‘celebrity‘. It just goes to show how unconscious this prejudice is, and that we all have it to one extent or another.

So what’s the moral of this tale then?

That the human body, whether disabled or non – disabled is neither disturbing, shocking or offensive – it should not be judged or hidden and it certainly shouldn’t be prejudiced against.

Oh and yes, disabled people can be  hotties too! 😉

And as my middle sister said as we discussed this issue “Our bodies are valuable and precious, disabled or not….and how dare anyone else make a judgment!”